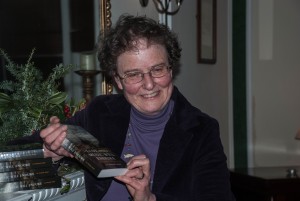 I’m of mixed Scottish and English ancestry. My mother was born and bred on the Isle of Skye and would probably have stayed there if the Second World War hadn’t intervened. She met my father who was a naval officer from Kent stationed at Kyle of Lochalsh. They married and settled in the south of England where I was raised. I studied history at Oxford in the late 1960s when the approach to the subject was Anglocentric. The Celtic neighbours were bit players who only featured when they were revolting against the English. However, as a counterbalance I spent every summer holiday of my childhood and teenage years with my grandparents in Skye where the music and culture seeped into my consciousness.

I enjoyed two satisfying careers in England. Firstly as a history lecturer in a Further Education College and secondly as a counsellor and therapist. I feel very fortunate to be living on Skye permanently now with my osteopath husband and two standard poodles.

I was inspired to write an historical novel after hearing the evocative songs of Mairi Mhor nan Oran ( Great Mary of the Songs). She was a bard and political campaigner born on Skye and active in the Land Wars of the late nineteenth century. Through force of character she overcame the barriers of background, class and gender to become the champion of her fellow Highlanders who were being evicted from their homes.

I’m interested in this period of history because it was a time of rapid change that caused disruption and heartache to so many people and provides a rich source for the imagination. I’m completing my second novel, ‘The Light from the Window’, which begins with a tragic death on the island of Rona and a suicide on Skye. The action moves from the Hebrides to Canada and brings in Robert Louis Stevenson as one of the characters. It’s the story of a quest with a mystery at its heart. The lighthouse and the camera were both developed in Victorian times and are important metaphors in the story for transformations that can have unpredictable consequences.

My first venture into print was writing a chapter in a non-fiction work, ‘What It Feels Like To Be Me’, by Jenny Salaman Manson. The book consists of a series of illuminating interviews with people of all ages reflecting on their inner selves. My chapter gives a psychological perspective on our sense of who we are.