Love and Music Will Endure is an historical novel, published in 2013 by The Islands Book Trust  @ £8.99. This is a well respected publisher of non fiction on cultural and historical aspects of the Highlands. My book is the first work of fiction they have produced.

She was born to a crofting family in North Skye in 1821. Like many Gaels before and since she had to leave the island to find work. She moved to Inverness where she met and married a shoemaker with a Skye background, called Isaac MacPherson. They brought up a family of six, five of whom survived.

Up to late middle age she had an unremarkable life but then two traumatic events occurred. The first one was Isaac’s death in 1871. Mairi had to earn a living and she worked as a private nurse in the house of an English soldier, Captain Turner. His young wife was seriously ill with a fever which caused her death. Mairi was accused of stealing her patient’s belongings while the family were attending her funeral. As a native Gaelic speaker Mairi didn’t understand the charges against her when she was tried in Inverness. The court found her guilty and she was given a short sentence.

The shock of this experience unleashed her voice. She poured her rage and humiliation at the false accusation into an outpouring of songs that linked her personal distress with the despair of her fellow Highlanders being evicted from their homes. At this low point she was helped by John Murdoch, one of the leaders of the campaign for crofters’ rights. With his assistance she obtained a place at Glasgow Royal Infirmary where she trained as a nurse and midwife. At the same time she appeared at Land League meetings where she inspired the audiences with her singing.

She visited Skye each year but longed to return permanently, especially as the island was becoming one of the main centres of opposition to unjust landlords. However, she couldn’t afford to give up work. In 1882 she had a stroke of luck, thanks to the generosity of Lachlan MacDonald who gave her a rent free house and later paid for her poetry to be published. He was a wealthy landowner but untypical off his class. Unusually he invited his tenants to set their own rents.

Eventually the Napier Commission of 1886 gave crofters security of tenure but was only a partial success because it failed to address the problem of small, overcrowded crofts and the plight of those who had no land at all. It’s likely that Mairi experienced the disappointment of the returning exile. She died in 1898 in what is now the Rosedale Hotel in Portree.

I have incorporated within my book the known facts about Mairi and the often amusing stories that have been passed down orally about her. For someone who died not so long before living memory there are many things we don’t know about her, especially her earlier life. So there has been scope to use my imagination to fill in the gaps. She was rooted in her homeland and her songs have survived because of her evocative words which were matched with beautiful tunes. Her story also has a universal resonance. She was one of that indomitable collection of Victorian women who refused to accept the constraints that society imposed on them.

The Title of the Book – Love and Music Will Endure

The title comes from a Gaelic proverb which translates as: ‘When the world comes to an end, only love and music will endure.’

I chose the proverb because I felt it was a fitting comment on Mairi’s life.

Reviews of the Book

‘To call this an historical novel, despite its being rooted in history, would be to place it in a straitjacket: like its central character it overflows with spirit, and carries the reader along on its compelling tide of narrative. This is a book rich in detail, beautifully observed, itself poetic, which allows us to meet a great (in more ways than one) woman, the people, great and small, whom she influenced and those who, for good or ill, shaped her view on life. When facts are realised as fiction, when history is made presently resonant, something magical can take place – and this is it.’

‘Liz Macrae Shaw has constructed a most readable, entertaining and thought provoking historical novel around this remarkable woman. The book must be warmly welcomed. It merits a wide readership.’

Images from the 2014 Skye Book Festival   I did a minibus tour of the places associated with Mairi Mhor, with Morag Henrikson who sang some of her songs, beautifully and with John Phillips, the countryside ranger who filled in some of the historical background. As you can see we were very fortunate with the weather. 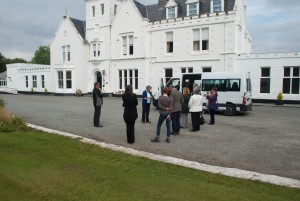 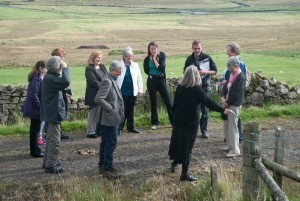 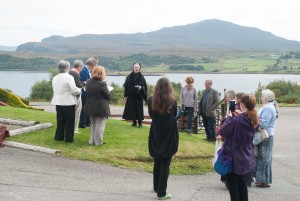 Ordering ‘Love and Music Will Endure’

Copies are available from bookshops and Amazon but if you prefer I can send you a copy directly ( £8.99 + £1.50 postage) if you e-mail me. 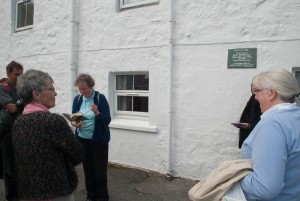 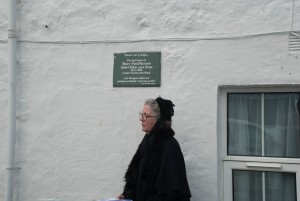